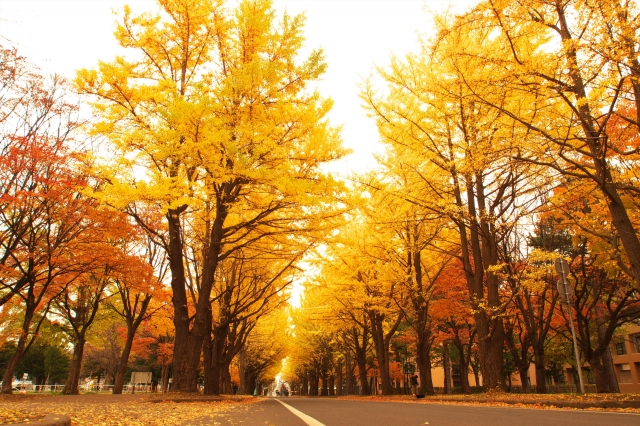 It seems like a lot of people are so obsessed with fall. Why autumn is so special for many people?

Hear are reasons fall it the most beautiful season of all for them here in Norway and in Japan.

When the lush green trees begin to turn yellow and orange, you know that fall is coming. Here in Norway, autumn is short and winter comes quickly. The autumn colours are only available for a few weeks of the year, which makes this time of year special.

The lambs you’ve seen everywhere over the summer have disappeared and the supermarkets become full of cabbage, lamb and black pepper.
This Norwegian national dish features crumbling lamb and flavorful cabbage. The warm, gentle flavors are perfect for the cold autumn months.

When I was in Japan, I never once picked mushrooms in the forest. The first time I went to Norway to pick mushrooms I was afraid they were poisonous, but after learning how to identify them, it became one of the most fun things to do in autumn.
The food made with the mushrooms picked by ourselves is exceptionally delicious.

Strawberries in the spring and these fruits in the fall are representative of the few Norwegian fruits.
The ones you buy in the store are delicious, of course, but the ones you eat freshly picked from the trees in the forest or garden are even better.
In Japan, lingonberries and cloudberries are not often found in stores, so I suppose they are especially special to Japanese people.

Fall is always rainy. It’s been raining all week except tomorrow. It’s a blessing for plants, but I think it makes us human beings feel depressed when it rains too long.
Look at the differences in autumn weather between Japan and Norway in another article.

Autumn in Japan is said to be the season for good appetite and sports. Shops are lined with autumn sweets and vegetables, and the whole town is decorated with the brilliant colors of autumn leaves and ginkgo.

In Japan, where rice is the staple food, the new rice of autumn is something special.
Freshly cooked rice is shiny and fragrant, and the more you bite into it, the sweeter it tastes.

Since moving to Norway, this is the fish I’ll miss most in the fall!
In recent years, the decline in numbers has been a problem due to overfishing.
Fatty saury is good for grilling, and thinner one is great for eating it in sushi or marinade in vinegar.
It is a truly delicious fish, whether grilled with salt, sashimi, sushi or even teriyaki.

Japanese fruit is often said to be expensive. The cost of living in Japan is relatively low compared to Norway, but most fruits are more expensive than in Norway.
But once you try it, you’ll understand why it’s so expensive. Japanese fruit is just so sweet and juicy.
You can also buy Asian pears in Norwegian immigrant shops, but unfortunately the taste is very different from the Japanese ones.
If you get a chance to visit Japan in the fall, try the nectar-filled apples – ripe San Fuji (a different kind of Fuji you can get in Norway), varieties such as Hokuto, Oirase and Red Gold, and the king of grapes, the Kyoho grape.

For those who love to drink, a typical autumn snack would be roasted ginkgo nuts. Sprinkling salt on the hot roasted ginkgo nuts is so delicious that you can’t stop eating them.
You can find chestnuts in Norwegian supermarkets, but unfortunately, Japanese chestnuts are not available. Japanese chestnuts are characterized by their high moisture content and sticky, yellow flesh.
Some people eat boiled chestnuts as they are, others cook them with rice to make chestnut rice, or make them into Mont Blanc or chestnut kinton.
New from Starbucks Japan this fall is the Chocolate Marron Frappuccino, which is made with whole chestnuts.
Chestnuts and sweet potatoes are two of the most common types of chestnuts and sweet potatoes used in fall sweets.

Mushrooms are also one of the most popular autumn flavors.
Enoki, buna shimeji, eringi (king oyster mushroom), shiitake, maitake, nameko, and matsutake mushrooms are the most popular mushrooms to eat in autumn.
Other than matsutake mushrooms, they are inexpensive and nutritious, and can be enjoyed in a variety of ways.
You can find several types of mushrooms at Asian supermarkets in Norway, so you should try them out. I recommend stir-frying them in butter and drizzling them with a little soy sauce.

When it comes to fall vegetables, these two are essential.
Japanese sweet potatoes are yellow inside, mousy and very sweet. They can be baked into sweet potatoes, cooked with rice, or made into sweet potatoes sweets Kochi’s specialty, sweet potato kempi, is also delicious. The first time I ate sweet potatoes in Norway, I was confused as to whether they were carrots or what they were, as they were orange in colour.
The squash is also floury and sweet.It is completely different from the pumpkin here. The pumpkin is infused with the flavor of the seasoning and goes well with rice. They are often used in desserts because of their sweetness. Atutually a farm in Drøbak sells Hokkaido pumpkins, but according to the shopkeeper, they seem to be the most popular, which is a pity because they are hard to find.

In Norway, the cosmos is a flower that can be seen at any time of the year except winter, but in Japan, people think of autumn when the cosmos are in bloom.
The Kinmokusei (Rhinoceros) is a very fragrant flower, sometimes called fragrant orange colored olive or fragrant olive. It is often used in perfumes, air fresheners and incense, and many people associate the Kinmokosei olive with the scent of autumn.

The autumn foliage in Norway is beautiful, but so is that in Japan. Norway has many coniferous trees, so you’ll find green trees and red-tinted trees, but Japan has many broad-leafed trees, and the sight of the leaves changing color to bright red is a sight to behold.

In Japan, there is a traditional monthly event called Otsukimi, which takes place in September or early October, when people watch the beautiful autumn moon and appreciate the autumn harvest. In this event, people make offerings to the moon or harvest, and 15 dumplings are offered and eaten.
In some communities, there is an event called “Otsukimi Thief,” where children act as thieves and receive sweets from each family.
This is also the time of year when many sports events are held at each school.
Western-derived events, such as Oktoberfest and Halloween, are also very popular in big cities.

Although Norway and Japan are about 8,000 km apart, there are some similarities between the two countries.

Here in Norway, people seem to spend more time indoors with their loved ones in the autumn.
Autumn in Norway is a beautiful and romantic time of year.