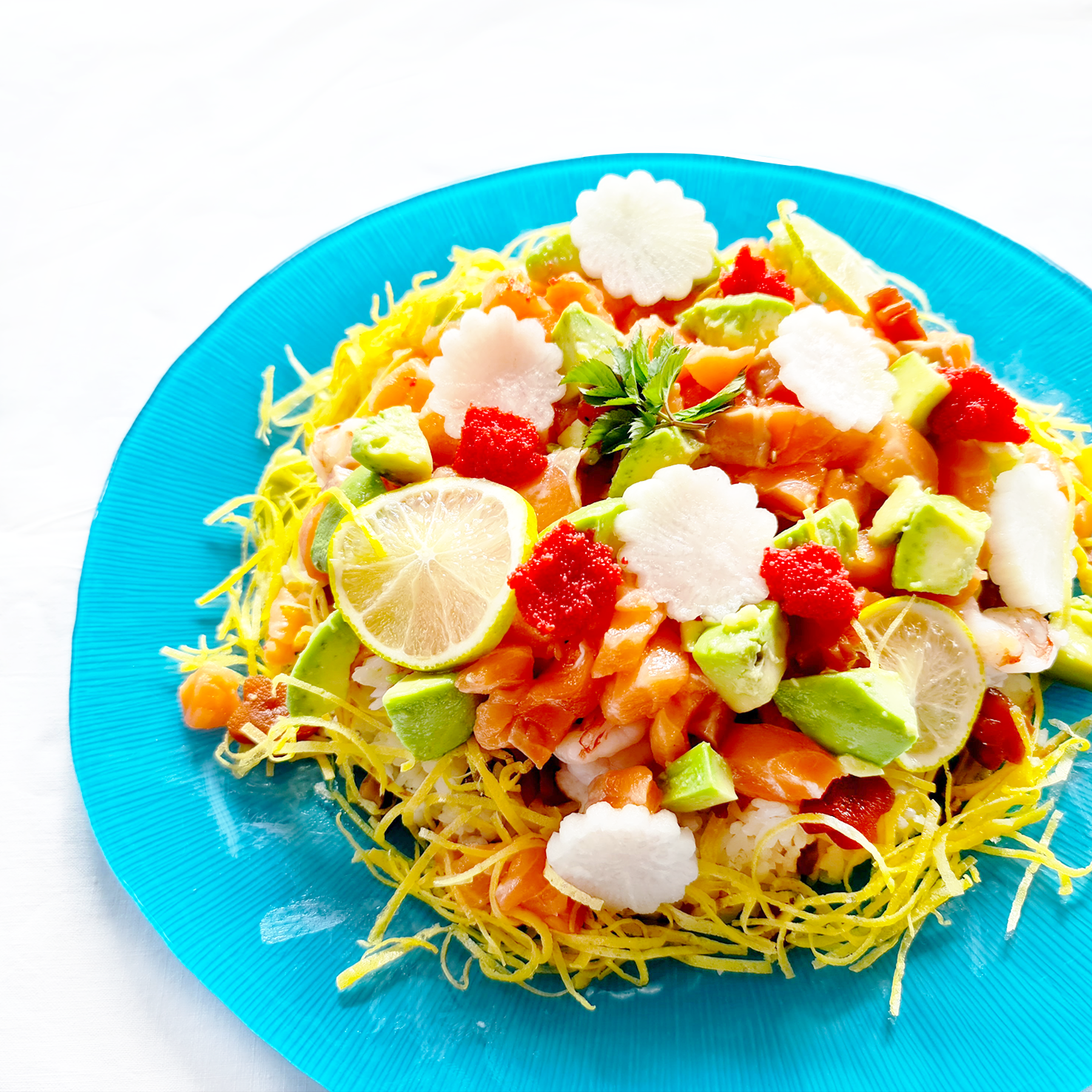 People outside Japan are often surprised to know that less than 10 percent of Japanese households make sushi, especially nigiri-zushi (Nigiri). Nigiri-zushi is something that people go out to eat or buy, and the most common types of sushi made at home are Maki-zushi (Maki) and Chirashi-zushi.

In this article, we will call the dish “Chirashi-zushi”.

Chirashi-zushi has a different delicacy from nigiri-zushi due to the careful preparation and seasoning of each ingredient. Since there are many ingredients, the nutritional value is higher than nigiri-zushi.

It is a very time-consuming dish to prepare.

In this article, we will call the dish in the picture Chirashi Zushi.

What does the word “Chirashi” mean?

Chirashi is an attributive form of a Japanese word Chirasu, which means to scatter. This dish is called chirashi-zushi because it has various toppings scattered on top of and inside the sushi rice.

A certain type of Chirashi-zushi is often confused with Kaisendon (Assorted Sashimi/seafood rice bowl). The difference is that kaisendon is a bowl of rice topped with unseasoned white rice and seafood sashimi, while gomokuzushi and chirashi-zushi have ingredients on top of vinegared rice.

First, let’s look at how to eat it, which is considered bad manners.

In the case of chirashi-zushi, a sushi dish with many small toppings, each of the toppings, except for the raw seafood, is seasoned differently. If you pour a mixture of wasabi and soy sauce over all the toppings, you will not be able to enjoy the aroma and seasoning of each item.

Another downside is that the sushi rice will be soaked in the soy sauce, spoiling the texture and taste.

So how should I eat?

When eating ingredients that require soy sauce (mainly raw seafood), dip the pieces lightly into the soy sauce and either eat them as is or put them back on top of the rice, top with wasabi if you like, and eat with the rice.

Why not mix the wasabi and soy sauce first?

When wasabi is mixed with soy sauce, the flavor and pungency are weakened.

In order to enjoy both the aroma of wasabi and soy sauce, it is recommended not to mix them.

However, if you are not using the real wasabi, you don’t have to be so particular.

What is most important is to enjoy and taste the food, so do enjoy your portion in any way you like.